I’ve never been to Bordeaux France, but it sure looks like a beautiful place to visit one day.  I do know one thing for sure, they make beautiful wine in Bordeaux.    In the 1930’s, after the  introduction of the railroad, grapes were coming in from other places, and were being sold as ‘Bordeaux’.  France had some fraudulent practices happening.  So, in 1935 they formed Appellations, a system in which to define a wine region, by it’s grapes.  In Bordeaux, only certain grapes are allowed to be grown, so you know what you’re getting.  And this is true throughout France.

Bordeaux wines are Blends.  Because of ecology, the reduced risk of a total crop loss and the potential to create more complex wines, a bottle of Bordeaux is a blend.  Let’s start with the Reds.  Grapes grown in Bordeaux that will make up a red wine are Cabernet Sauvignon, Cabernet Franc, Merlot, Malbec and Petit Verdot and less common now Carmenere.   Bordeaux wines are usually Cabernet Sauvignon dominant or Merlot dominant.   Bordeaux in Britian is referred to as Claret.  (not pronounced Clar-ay, as one might think, but the ‘t’ is pronounced – clar-ette).  Britian is a very important country in the wine world, not because it grows a lot of grapes, but because it buys a lot of wine.

Here’s one of my favorites that I have written about before, and still have one bottle in my wine rack.  It’s the Black Label Claret from Francis Ford Coppola.  If this wine originated in France, it would be labeled a Bordeaux.  Cabernet Sauvignon, Petit Verdot, Malbec, Merlot and Cabernet Franc.    It is Cabernet Sauvignon dominant with big bold flavors of dark fruits, spice and vanilla. Perfect to pair with a nice juicy steak. Bordeaux wines can be some of the most expensive in the world.  Situated in the village of Pauillac in the Medoc area of Bordeaux, Chateau Lafitte wines was given top classification back in the 1800’s and can command $1000 and more for it’s wines on a consistent basis.  But you don’t have to spend $1000 to enjoy a nice Bordeaux.

Here’s one I had the other evening, for just under $20, and it was gorgeous.  I let it breathe for over an hour and it was fantastic.   Ruby red color, this Merlot dominant wine has ripe cherry flavors and a touch of oak spice.

Here’s another example of a Bordeaux that’s a staple in my wine rack.  At $16.99 , Chateau Bois Pertuis is one of those fantastic deals you’ll find.  A blend of Merlot, Cabernet Sauvignon and Cabernet Franc, this medium bodied beauty was aged in oak for 8 months.  Very smooth with flavors of dark fruits, cherries, plums and a slight hint of smoky mocha that in no way over-powers the wine.  Great value!

White grapes grown in Bordeaux are Sauvignon Blanc, Semillion (pronounced Sem-ee-on) along with Muscadelle, Colombard and Mont Blanc.  At one time Semillion was the most popular white grape grown in Bordeaux, with its richness and texture.  However, this thin skin grape is very suspectible to  Botrytis (rot) and by itself has almost a waxiness.  It is fantastic when blended with Sauvignon Blanc, which in recent years has become the most popular white grape in Bordeaux and adds a crispness and freshness to wine. 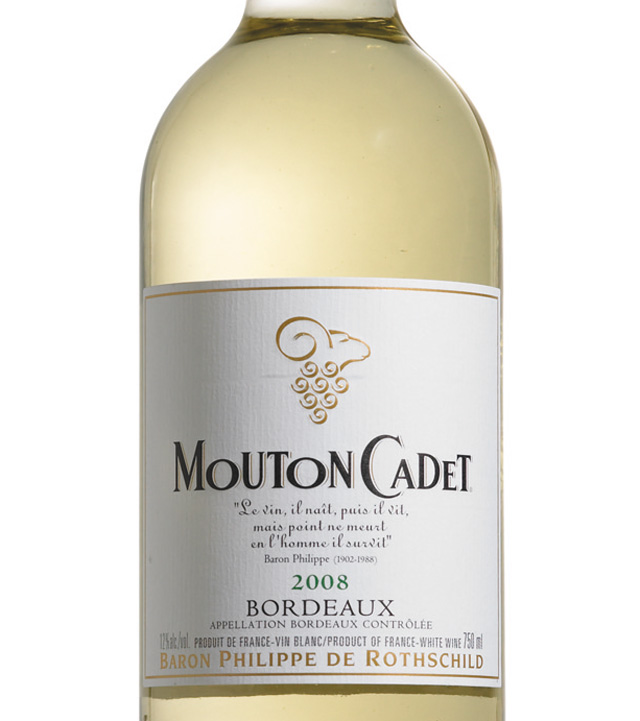 Here’s an example of a nice little white Bordeaux from France and it comes in under $16.   Light to medium bodied and gorgeous flavors of pear and peaches, with a hint of jasmine, the Mouton Cadet Bordeaux from Baron Phillipe De Rothschild is a winner.

Here’s another white Bordeaux I have tried in the past week, in our class as a matter of fact.

Chateau Pont de Brion Graves, 2009 vintage is a new style of White Bordeaux, and has less oak influence. 65% Semillion and 35% Sauvignon Blanc, this wine was well balanced with a touch of herbs.  We weren’t eating in class but this wine would be very food friendly.

Before I sign off, I did want to mention that in California it’s Meritage that is a Bordeaux style of wine.  The Meritage Foundation was formed in 1988 by a small group of Napa Valley vintners, who wanted to create Bordeaux style wines but were frustrated by government regulations on the matter.  This is a beauty from Robert Mondavi.

My goal is to make French wine less intimidating for us everyday people.  Don’t be afraid of the French wine section, you can find some fantastic wines in there.