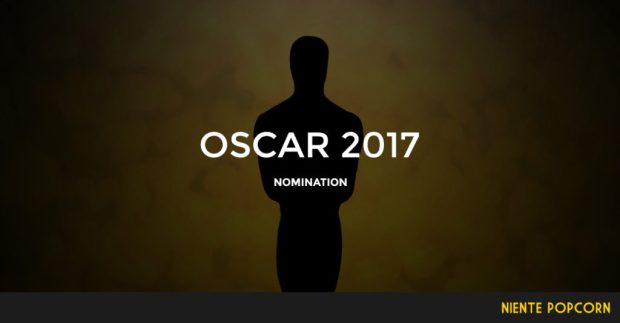 The Oscar’s are my Super Bowl!  I am a huge movie fan and I love all the awards show.  I am one of those people that are in Oscar pools, and watch every award being given out, including film editing and costume design.  And although I picked who I thought the Academy will choose, it doesn’t mean I agree with them.  I definitely would have personally picked different choices. 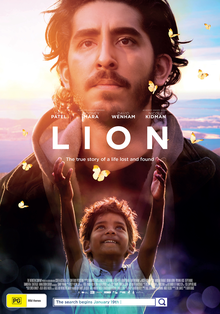 My top 2 contenders for Best Picture would have been Hidden Figures or Lion.  Two spectacular movies that both deserve the top prize.  I’m sorry to the La La Land lovers, but I’ve seen the movie,  and La La Land cannot compare to the mastery of these two movies.  But Darlene, this is a wine blog… right.

So, here’s what I will be drinking while watching the Oscars!  I picked up a bottle yesterday  and I’m super excited because my friend Judy is coming over to watch the Oscars with me and she’s never had this wine. 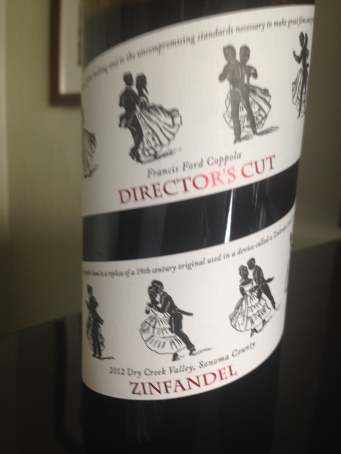 From the vineyards of Francis Ford Coppola, comes the Director’s Cut Zinfandel, a masterpiece on its own.  This man makes wine as good as the movies he directs.  Not only is he an Oscar winning Director (5 Oscars to his name), this wine has also won awards.  It is rich and voluptuous from the Zinfandel grapes, and then a little Petite Sirah is added which adds interesting layers and some spice.  I did pick up a bottle,  but I will tell you at $42 it’s a bit of a treat.   But I personally like treating myself to a special wine for special nights.

In my opinion, this is the greatest race this awards season, the Best Actor category.  Casey Affleck gave a mesmerizing performance in Manchester of the Sea, and I would love to see him win the award.  However, Denzel Washington could make history if he wins Sunday night, winning his 3rd Best Actor award.  It’s a tough one, both performances were stellar, but honestly, I chose Denzel in my Oscar pick because I believe the Academy will go with the veteran performer.  Speaking of stellar, here’s another great wine to enjoy Sunday night, aptly named Cinema.

Also from the Director’s Cut line from Francis Ford Coppola, comes this delicious blend called Cinema.  Zinfandel, Cabernet Sauvignon, Petite Sirah, and Merlot from  Sonoma County brings out the best of these 4 grapes.  Regular readers know how much I love Zinfandel, it’s what I picked to drink tomorrow night.   When you add the full-body of a Cabernet Sauvignon and the juiciness of a Merlot, with the zesty spice from the Petite Sirah, you’ve got a winner.  Done in the style of Super Tuscans, this wine is exotic and delicious and a great steak wine.   It’s also a great pizza wine which is what I will be dining on Oscar night!

And now for my wine of the week…..

This wonderful wine from Spain is called Monasterio de las Vinas and it’s a blend of Garnacha, (which you may know Grenache), Tempranillo and Carinena.  Carinena originates from the Carignan grape which is grown in Italy, California and a few more New World regions.  This wine tastes like a $50 bottle of wine and is priced around $22 here.  If you live in British Columbia, it is $14 in your liquor stores and in Ontario it is $18, so grab it up, it’s a tremendous value.  Gran Reservas are spanish wines that have to be aged a minimum of 5 years, and normally they are priced at $35 and up.  This is a steal of a deal at $22.95.  Aged 24 months in oak, and aged 12 years overall, this wine is super smooth.  I am guessing this won’t be available here for long, so grab it while you can.

Well, if  you’re like me you’ll be watching the Oscars with my Oscar pool form and a nice glass of wine.  I picked up a bottle of the Director’s Cut Zinfandel, because it’s a special night.  Enjoy the show! 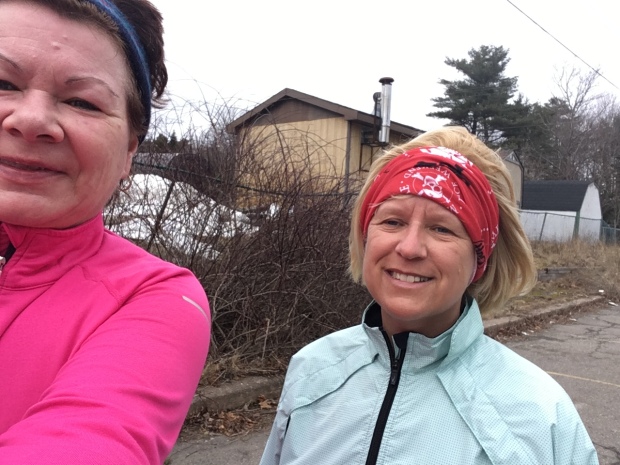 On Tuesday, January 31st of this year my friend Beth and I went running on a trail.  You can see by the picture how much snow was on the ground… very little.

And then this happened…. 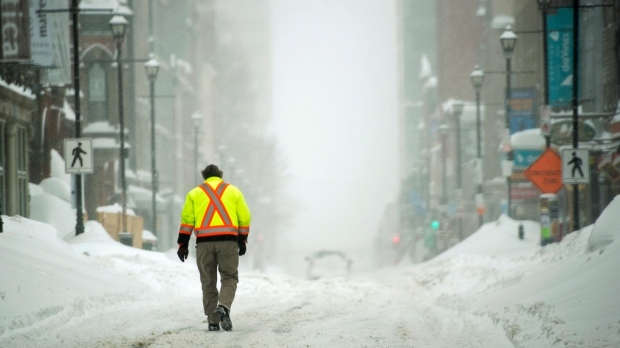 Many people stocked up on these… 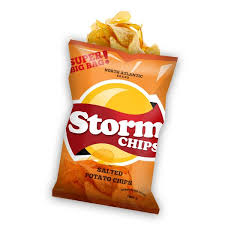 We had 3 storm days in a week, so allow me to apologize to my liver for a moment.   Being stuck inside doesn’t necessarily have to be a bad thing. 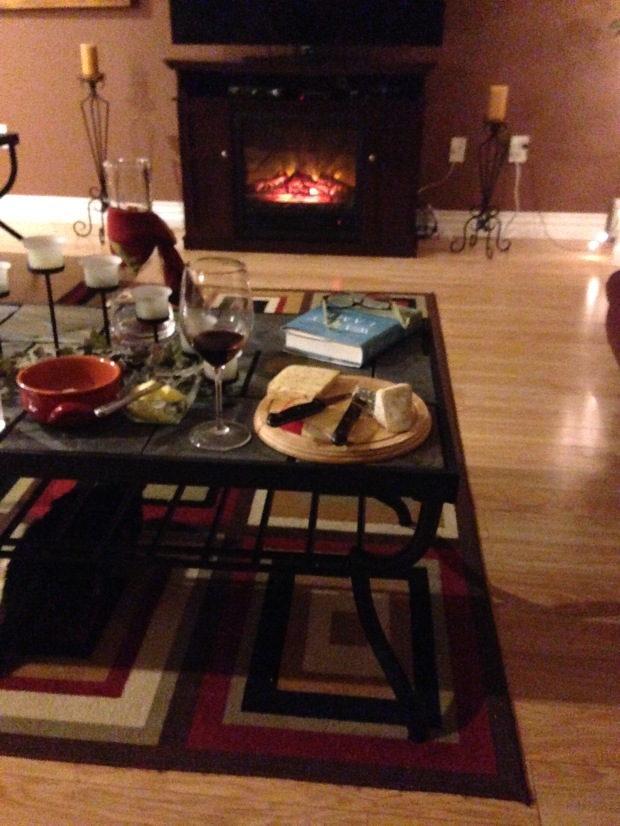 This is what my place looked like on a couple of occasions this past week.  Cozy fireplace, snacks, a good book and a glass of wine.

So what was in my class on the storm days ?

One of the new wines I have tried recently was this Uncensored Shiraz.  From Langhorne Creek in Australia, this wonderful Shiraz boasts flavors of black plums, spice and a hint of chocolate.  It was do good and would make a great BBQ wine.   Also a great red wine to try with chicken .

I was thrilled to discover our liquor store has brought back The Exhibitionist  Merlot.    Another Australian beauty this one hails from Langhorne Creek.   It’s a great price point under $18 and a great wine for that price point.  Robust plum flavors and hints  of black pepper, I let this one breathe a bit when I first opened it.  If the first taste is a little hot on your throat,  letting it breathe for 30 minutes will fix that.  As a matter of fact if you get a wine that’s  a little boozy or hot on the back of the throat, that’s alcohol!  And many times letting it breathe for 30 minutes will cure that. 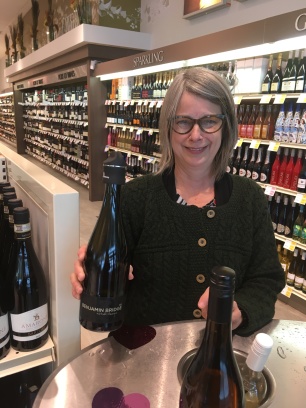 This is Moira, holding a bottle of non-vintage sparkling wine from Benjamin Bridge.  This wine is done in what we call the Traditional Method.   That is the traditional method of making Champagne, however did you know unless the wine is made in Champagne France it is not allowed to be called champagne.   When Dom Perignon first tasted Champagne he said “Come quickly I’m tasting the stars”!   You will believe you are tasting the stars when you taste this wonderful wines from this Nova Scotia vineyard.   Winemaker John Benoit Deslauriers  is becoming world renowned for first class sparkling wines and once you taste this wine you’ll understand why.

That’s it for me this week

Till next week Cheers

The world of wine is constantly changing.  It’s one of the things I enjoy most about wine, however that can be confusing for some wine drinkers.  Each year I do a wine blog on information I have read from wine experts around the world, predicting what the upcoming trends will be.  Trends can come and go, so don’t feel bad if your taste in wine stays the same.  Just so you know, I get this information from several sources, and put it together in what is, hopefully, an easy-to-read wine blog.

The more people drink wine, it seems the more they want to learn about wine.  I am constantly being asked to host at-home wine tastings so that people can learn more about wine.  Wine tastings give people the opportunity to try some different wines that they may not normally buy.  I read an article this past week that said my home province of Nova Scotia has more Sommeliers than any other province in Canada.  Isn’t that great!  And, fingers crossed, I will graduate and join those ranks in April.  And more knowledge doesn’t have to mean accredited Sommelier, it can be as simple as learning more information about your favorite wine or the region it comes from.   For many people it’s discovering what they like about their favourite wine so they can try new wines that are similar.

2.  Drinking In vs Drinking out

I read an article in the past few weeks that says ‘on-site’ wine drinking is seeing a bit of a decline, while liquor stores and wine stores are seeing an increase in sales from year to year.  So we are drinking less in restaurants, and more at home.  And it makes sense.  First of all, Congratulations if you don’t imbibe while out and about. That way you don’t have to worry about the drinking and driving.  I think  there was a time in the past many people felt a couple of drinks wouldn’t hurt and they were still safe to drive.  I think people are becoming more and more careful when it comes to drinking and driving.  Plus eating out can be expensive.  Even among my group of friends,I notice we get together for dinner’s  in one of our homes, as opposed to going out to a restaurant.  I think more and more, people are entertaining in their homes.  It’s cozier, more intimate, more relaxed and definitely easier on the pocketbook.

I write quite frequently about Red blends, I personally am a big fan. The mind shift of ‘blends’ is changing and blended wine sales grew by over 10% in 2015.  There was a time many years ago, a blended wine was considered a lower quality.  This is no longer the case, as quality vineyards and qualified winemakers are putting out spectacular wine blends.  And it’s interesting to note in the United States, for a label to carry just one of the grapes,  it doesn’t necessarily mean there’s just that one grape in the bottle .  For example, for a label to say ‘Cabernet Sauvignon’, there must be at least 85% Cabernet in the bottle, and 75% of those grapes from the region stated on the label.  The other 15% of varietals can be made up of a combination of grapes ‘blended in’.  In Oregon, that percentage must be 95%, and 100% of the grapes must be from Oregon.  And different countries and different regions have different labelling laws.  I’m telling you this so you realize you could be drinking a blend and not know it, because the manufacturer is just listing one grape on the front of the bottle.   Here are some of my favorite blended wines. 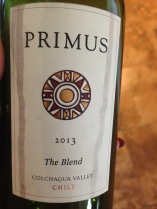 I couldn’t ignore it.  Believe me, I tried.  Several articles are listing one of the hot trends for 2017 is wine in a can.  I’m sorry, let me rephrase that.  Increased sales of wine in a can.  Wine in a can is already a thing.  And they say you are going to be able to get good wine in a can.  If it comes to Eastern Canada, I will be trying it.  Canned wine sales doubled last year.  People are looking for convenience, and since Millenials are going to be playing a huge role in the world of wine, apparently they are not drawn into the romance of popping a cork.  They would just as soon pop the tab of a can. 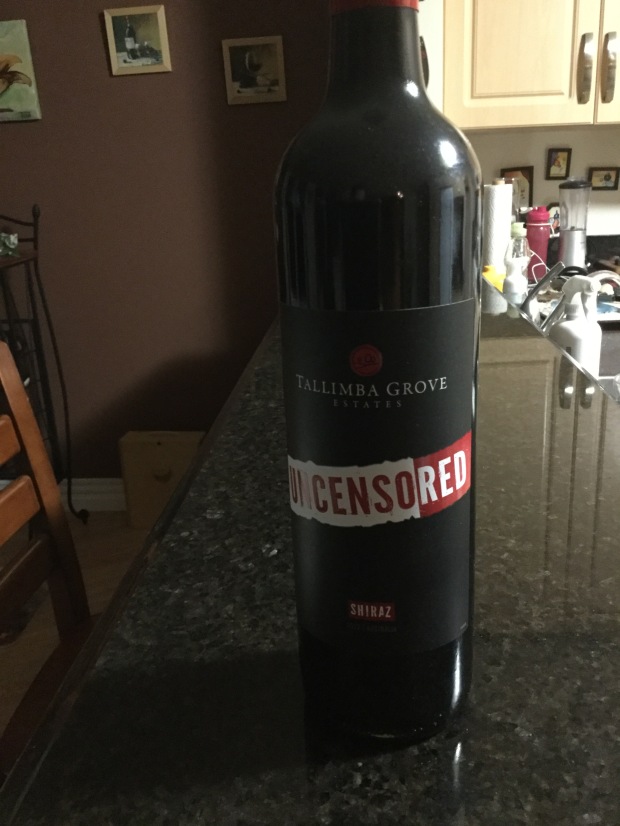 The Tallimba Grove Uncensored Shiraz hails from Australia and  it is very very good.  It has a price point of about $17,  and after tasting it I had to double check the price.   It had been in my wine rack for a few weeks and I had forgotten the lovely price point.   I know it’s only February but you may want to pick up a couple of bottles for when you start barbecuing.  This is a great wine for all things barbecue.  Rich fruit with spicy notes and a really nice lingering finish.  Its my pick of the week. 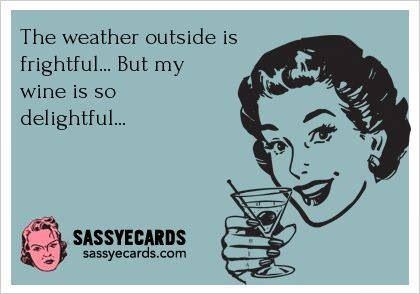 I think all of Canada is experiencing quite the cold snap and some nasty snowstorm is as well.   Our friends on the eastern seaboard of the United States also had a rough week weatherwise.  I thought this was a fitting end to this week’s wine blog.